Sailplane Tie-Down Kit with 3 Padded Straps and 4 CLAW Anchors
You save $20 when you order this kit - as opposed to ordering the parts individually.  It makes a very strong and reliable temporary tie-down system.

You can also take one strap and one CLAW anchor (and a hammer) along with you in the glider for use during an off-airport landing.  They could be used to secure one wing low to the ground with that wing pointed into the wind.

This kit t it has only 3 straps and 4 anchors - the ideal for a secure setup for a glider.

Note: The rope that is included in the CLAW-Kit-3 could be used together with a TOST or Schweizer tow ring to secure the nose of the glider to the CLAW anchor.

Note: When using the straps to secure your glider's wing tip, be sure to use a wing stand under the wing near where the strap is used.

Note: Not recommended for long term use because any temporary anchor will loosen over time.  Designed for use with the load pulling straight up.  The capacity is reduced dramatically when the load is applied from the side.  Also, this system will work differently in different types of soil. Obviously, heavy clay or soil with turf on top is better than sandy or rocky soil.

Note: Do not wrap the strap around any control surfaces such as ailerons of flaps.

Note: There are no guarantees on the strength of this strap and anchor system.  It is very strong, but don't come after me if your glider is damaged in high winds.

The CLAW - One CLAW and 3 SpikesThe harder you pull, the more it grips the earth. The only tie down .. 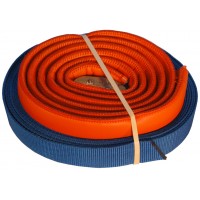 JJ Wing Tie-Down KitThe JJ Wing Tie Down Kit is a simple, yet effective solution for anchoring your ..