Overview (from inside front cover)
As a world-record holder in ballooning, sailing and aviation, Steve Fossett has left an unprecedented mark on the history of extreme sporting and human endurance achievement.  He was the first to balloon across the continents of Asia, Africa, Europe and across South America and the seas of the South Atlantic, South Pacific, and Indian Ocean, also becoming, in 2002, the first solo balloonist to fly around the world.  In March 2005, he succeeded in completing the first solo, nonstop circumnavigation of the world as the pilot of the Virgin Atlantic GlobalFlyer.  With two additional flights in February and March 2006, he broke the Absolute Distance Record and the Absolute Closed Circuit Distance Record.

Yet Fossett doesn't limit his exploits to the jetstream.  He is perhaps the most successful speed sailor in the history of sailing, setting Outright World Records among which are the illustrious Round the World, Transatlantic and Indian Ocean records.  As an endurance competitor, Fossett has completed sports events that include the Iditarod, Ironman Triathlon and the English Channel swim and has climbed the highest mountain peaks on six of the seven continents.

Fossett's achievements have attracted the curiosity of the world.  What makes someone give up the lucrative ownership of a Chicago financial trading company for the romantic, thrilling, yet dangerous world of adventure?  How did it feel to be one against the elements?  How did he respond when the winds of fate turned against him, when critical technological instrumentation failed?

Reliving the excitement, setbacks, thrills, unwavering determination and the near-death experiences of these challenges, Chasing the Wingdelivers a dynamic, action-packed and inspirational memoir that answers these questions.  Sharing stories from his early family life, his wildly successful career on the American financial exchanges, and how his friends and heroes have emboldened him to achieve his goals; Steve candidly recounts the milestones, challenges, defeats and victories that have comprised his much-heralded career as the world's foremost adventurer and that paved the way to setting a remarkable 115 world records.

About the Authors (from inside back cover)
Pilot, balloonist, yachtsman and endurance sportsman, American Steve Fossett has set numerous sailing and aviation records (with the broadest possible range of flying machines), and is one of the world's most accomplished modern adventurers.  He was the pilot of the Virgin Atlantic GlobalFlyer.

Will Hasley is a movie and TV scriptwriter as well as a published author.  He lives and works in Los Angeles.

Review by Paul Remde
I am a big fan of Steve Fossett.  I have closely followed many of his record breaking endeavors over the years.  I met him briefly at the Soaring Society of America convention in February of 2005 just a few weeks before he made the first nonstop around the world flight in the Virgin Atlantic GlobalFlyer.  He impressed me as a very friendly and down-to-earth person.  I've also been pleased to sell a few soaring instruments to his team over the years - shipped to New Zealand and Argentina.

I thoroughly enjoyed reading about his early life as an Eagle Scout and his business career and especially liked reading about his adventures related to endurance swimming, sled-dog racing, mountain climbing, yachting, ballooning, and flying airplanes and gliders.  He has an extremely adventurous spirit and a "can do" attitude that I admire.  While I have no desire to climb mountains or go around the world in a balloon, I enjoyed reading the entire book.

Upon first opening the book I was a bit disappointed to find that there are no chapters dedicated to soaring and no photographs of gliders.  In recent years he has obtained many world soaring records.  Thankfully, there are about 7 pages in the beginning of the last chapter dedicated to his soaring adventures.  The section gives a good overview of his adventures setting world soaring records in gliders with Terry Delore and flying with Einar Enevoldson going for high altitude flights with the Perlan Project.

After the book was published he and Einar Enevoldson set a new world altitude record in gliders of 50,671 feet (15,447 m).

I feel that all cross-country glider pilots have a bit of adventurous spirit in us.  I certainly felt like an "adventurer" while doing my first long distance cross-country soaring flights and while going after state soaring records.  I found the book to be very motivational.  It has rekindled my desire to do long, memorable and record setting soaring flights. 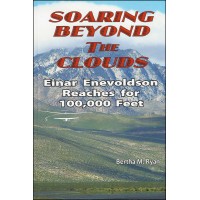