Silent Wings - The Saga of the U.S. Army and Marine Combat Glider Pilots During World War II
Author:  Gerard M. Devlin
Note: This is a used book.  Limited Availability, Condition: Good
This book is no longer in print.  At right are links to used copies.

From the Dust Jacket
The combat glider pilots were a rough and ready breed, not bashful about saying that the "G" on their silver wings stood for guts.  Their special daring is captured in these pages.

This engrossing history presents for the first time a single volume detailed accounts of every air assault and land battle fought by American glider pilots in the European, Pacific, and China-Burma-India Theaters during World War II.  British, German, Japanese, Italian, and Russian glider actions are also covered in dramatic detail.

Silent Wings makes the reader virtually a passenger in the cockpits of heavily laden gliders performing their hair-raising crash landings far behind enemy lines.  Readers will discover how American strategists in the late 1930s rejected the very idea of military gliders until they were used with devastating effect by Germany against Belgium's seemingly impregnable Fort Eben Emael in May of 1940.  From that point forward, America rushed into frantic glider production and pilot training - yielding some stunning successes as well as some spectacular air disasters - and produced the most formidable glider force in the world.

During his five years of research for this book, Gerard M. Devlin interviewed hundreds of pilots who took part in battles around the globe during World War II.  He spoke with the flight engineers who conducted the initial research and development of these remarkable aircraft, as well as with the troops who rode in gliders and the men who led them - American airborne leaders such as U.S. Army Generals Gavin, Ridgeway, Swing, Yarborough, Miley, and Harper.  Lavishly illustrated with maps and photographs, this panoramic book is top-of-the-line military history by a master of the craft.

Search for used copies at: alibris or amazon.com or Barnes&Noble or ebay 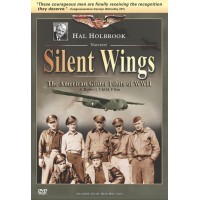 Silent Wings - The American Glider Pilots of WWIIDVD, Format: NTSC (Region 0, so it can be viewed in..