Overview
Joe Karam was born to transcend, but perhaps not to fly. When at twenty-seven his quest for freedom led him to set foot in a glider for the first time, he was overcome with fear and desire. Nothing seemed to have prepared him for such a formidable test of courage, nor did he know any­thing about Charlie, the taciturn flight instructor he had just entrusted with his life. And yet the sky kept calling... A didactic memoir and a passionate love letter to aviation, "Danger and Poetry" unites heart and mind to celebrate the pursuit of dreams and the power of teachers.

Excerpt
". . . This whole sequence repeated itself over and over, each time becoming more dire as I was losing my grip on the situation. Pitching, rolling, yawing, shifting up and down, left and right, forward and back, the glider seemed out of control, and I started envisioning how this was going to end: with glider and tow plane swirling around each other like violently hurled nunchaku, spiraling down into the ground with horrifying elegance, as empty fields, mountain ridges, blinding sun and infinite ocean cycled furiously around us. “I’ve got the glider!” boomed a merciful voice inside my headset, filling the tiny cockpit with instant relief. Certificated Flight Instructor Charlie Hayes, sitting directly behind me, was back at the controls. My first day in a glider wouldn’t have to be my last."

An American immigrant of French upbringing and Lebanese descent, Joe Karam was born in a Christian family in Beirut during the Civil War and was then raised in Paris with a Jesuit education before deciding, at seventeen, to pursue the American Dream. Beginning anew in California, he received three college degrees and a teaching award from Stanford University, generated a dozen patents as an inventor at Google, composed piano scores for film and dance, raised funds for cancer research, completed long course triathlons, swam across the Golden Gate, and earned his airman certificate as a private glider pilot. Upon becoming a United States Permanent Resident, he launched an acting career in San Francisco before relocating to West Hollywood. Having now starred in over 80 film productions and helped as many teams of storytellers bring their stories to life, he got around to crafting one of his own, "Danger and Poetry", an aviation memoir written for prospective and novice pilots as well as anyone who hasn’t stopped dreaming and daring.

Review by Tom Knauff
“Insightful and revealing.” - Thomas L. Knauff, member of the United States Soaring Hall of Fame and glider pilot from the 1999 motion picture "The Thomas Crown Affair"

Review by Paul Remde
I haven't read it fully yet, but so far it is a nice, short, easy read that reminds me of the book "Once upon a Thermal" by Richard A. Wolters. I enjoyed that book very much when learning how to fly gliders because it showed me that learning to fly gliders was attainable. This book looks equally suited for those just getting into soaring. It promises to be inpiring, motivational, and fun. I'll update this page when I finish reading the book. 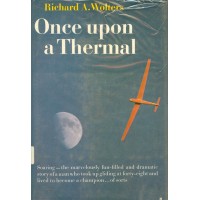 Once Upon a Thermal - Used

Once Upon a Thermal - Usedby Richard A. Wolters This book is no longer in print.&nbsp..