Note: The kit refers to the glider as a PS-2, but other sources (see quote below) refer to it as the PS-1.  This glider was much larger than the PS-2 and had a 50 foot wingspan.  The PS-2 had a 36 foot wingspan.

In the "Clio's Wings" quiz in Soaring magazine from November, 2008 Raul Blacksten states about this glider, "The Texaco Eaglet was the PS-1.  Originally the brothers simply called the glider "the big ship".  Being familiar with a Franklin glider that he flew in the Cleveland Air Races, when Captain Frank Hawks wanted a glider to aerotow across the U.S., he naturally came to the Franklins.  With the sponsorship of Texas Oil Company, Hawks acquired "the big ship" and this it flew into history with its more formal name, as the Franklin PS-1 Texaco Eaglet. The Eaglet, a little worse for wear, still exists in the National Air and Space Museum collection." 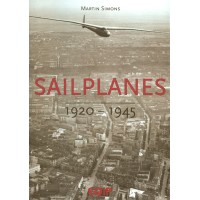