Not currently available. Hopefully it will be available again someday

A manual for students and a guide for instructors

This book provides a reference point for use in conjunction with aerobatic instruction.  It aims to give an understanding of the important subjects that are essential for safe and successful aerobatic flying.  The book is divided into two main sections and an appendix.  The first part deals with theory and includes safety considerations, flight envelopes, glider design and Aresti - the commonly used system of representing aerobatic figures in graphical form.  The second part describes how to fly twenty of the most common figures.  This includes eleven basic figures for beginners and nine advanced figures for more experienced pilots.  The appendix gives a step-by-step guide to constructing flight envelopes for various gliders.

About the Authors (from back cover)
Peter Mallinson and Mike Woollard both started flying gliders at Nympsfield in Gloucestershire in their late 20s and their flying careers progressed along parallel paths. They both spread their wings to include powered aviation at an early stage and were soon flying a Fournier RF4D motor glider.  This aeroplane with its delightful aerobatic qualities undoubtedly encouraged them in their common fascination for aerobatics.  In 1989 they attended a course in glider aerobatics run by the Polish champion, Joseph Solski and were instantly inspired by his remarkable flying and instructing skills.

Peter Mallinson
Peter is a Research Zoologist by profession although with an initial engineering background.  He describes his lifelong love of flying as 'generic', although he wonders whether it may have been influenced by his childhood environment as the son of an RAF pilot.

He started flying in 1977 at the age of 28 at Nympsfield, which remains his home club.  He sees aerobatics as a natural progression in the process of learning to fly aeroplanes and launched seriously into aerobatics following the 1989 course.  He has travelled extensively in Poland and Germany pursuing further training and after seeing the advanced state of the sport on the continent and has been determined to promote the sport of Glider Aerobatics in the UK.  He has spent many hours teaching aerobatics at Nympsfield and other clubs around the country and was appointed BGA (British Gliding Association) Regional Aerobatic Examiner in 1995.

Mike Woollard
Mike is a Chartered Mechanical Engineer with a deep rooted and professional interest in aerodynamic and technical matters related to aviation.  He is Chairman of the British Gliding Association Technical Committee.  He started gliding at Nympsfield in 1980 at the age of 27, moving in 1992 to the Cambridge Gliding Club at Gransden Lodge.  He holds a BGA Advanced Aerobatic Instructor's rating.  Much of his aerobatic flying experience has been gained 'hanging in the straps' of various aerobatic two-seater training gliders in which he regularly instructs, or in his favorite aerobatic practice mounts, the RF4D and the Fox.

He is also a keen cross-country pilot, flying a Standard Cirrus glider which he shares with his wife Susan.

Reviews
"This is a masterly treatment of a subject neglected in British gliding for decades but which has drawn increasing attention in recent years. . . Beautifully presented and meticulous, it would be very hard to beat what is certain to become the bible of the unpowered aerobatics art. Even aerobatic aspirants who demand an engine up front as well as kinetic energy would benefit from digesting it." - PILOT

"The authors have produced a volume which is set to become a standard reference work for the future. . . fulfills the needs of both the students and the instructor, and is written in an easy style with excellent diagrams and photographs throughout." - FLYER

"It should be on every pilot's bookshelf, whether or not you are keen on aerobatics. The content is well structured and the layout is good . . . It's easy to read and concise; I liked the style of writing. The authors' enthusiasm comes through and you actually want to go flying." - SAILPLANE AND GLIDING

". . . this is a book no self-respecting Fox pilot can afford to be without, and if the subject doesn't grab you, then the copious collection of pictures of just about every silent aerobatic mount in existence will surely speak to your soul." - SILENT FLIGHT

The Handbook of Glider Aerobatics 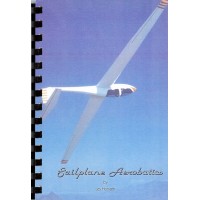