3M Tape Overview
3M makes very good gap-seal tape.  It is extremely stretchy which allows it to follow the complex curves around the leading edge of the wing root on my Ventus b (although no tape can form to every curve). Since it's a high quality 3M product, it leaves a minimal amount of residue when removed.  It is made of 5.3 mil (0.13 mm) thick polyethylene.  The only negative to this brand of tape is that the white tape is not as bright white as the Bowlus tape.

Note: I strongly prefer the Bowlus Maxi Gap Seal Tape because it is much less expensive, brighter white,  and works great.  It is also said to have greater U.V. protectors built-in.  3M makes great products, but when I buy it from the local distributor, it is already somewhat less bright white and telescoped.

Telescoping
Telescoping is the unavoidable tendency for rolls of tape to become skewed over time.  It is caused by internal stresses that are built into the roll during the manufacturing process.  It can be made more extreme by subjecting the rolls to heat or dramatic temperature changes.  I do my best to insure that the rolls telescope as little as possible.  As soon as I receive the tape I put the box on a shelf in my basement where it is cool.  You would think that would keep the rolls from telescoping - but it doesn't.  Some additional telescoping can occur during shipment to the customer - especially when shipped during hot weather.  The good news is that although the telescoping makes the rolls look less attractive, it does not affect the performance of the tape. 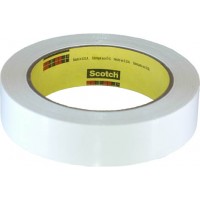